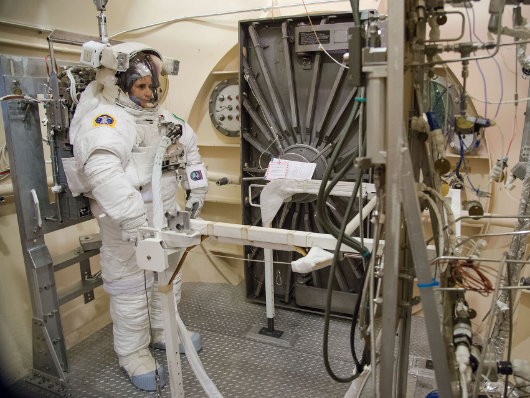 Between November 2014 and June 2015, Samantha Cristoforetti broke the world record for the longest space mission by a woman.  The previous record was held by Sunita Williams, who spent 195 days in space in 2012. Cristoforetti's record was set by accident when a Russian space agency freighter burnt up on re-entry causing Cristoforetti's return to be delayed by a month while the accident was investigated meaning she spent 199 days in space. This was a mission of firsts:

As an Italian airforce fighter pilot, Samantha Cristoforetti had plenty of hours of flight time but this was her first mission into space.  She travelled a total of 84 million miles on her round trip to the International Space Station and back to Earth.  While she was there, she conducted a number of important experiments which could have huge implications for life here on Earth.  However, she is best known for being the first person to drink from the ISSpresso machine: the first espresso machine to operate in zero-gravity using capsules.

Some of Cristoforetti's experiments involved testing new medical technology.  One involved testing to see if nanoparticles could be used on bone cells to prevent osteoporosis.  Another involved using microgravity to manipulate cell shape by interfering with the cytoskeleton of the cell to start a cascade of reactions that could affect all the major cell functions.  This technology, if perfected, could be used to treat connective tissue diseases, osteoporosis and cancer.

The Future of Space Exploration

Scientific breakthroughs are nothing new on the International Space Station and in 2014 they made a major breakthrough in ongoing space exploration.  The Space Station's 3D printer created a ratcheting socket wrench for the astronauts to use.  Although it doesn't sound that dramatic, it demonstrates that astronauts can make tools for themselves in space without having to wait for them to be sent from Earth.  This has huge implications for sustainable space exploration as astronauts will no longer be dependent on their connection to Earth enabling them to go further than they have ever gone before.

All of these breakthroughs, those on Samantha Cristoforetti's mission and those of the International Space Station, are due to experimentation and manufacturing capabilities on Earth. Ultra High Vacuum equipment is crucial for space technology development. Contact AML today to find out how their high level of expertise can help you by phoning 01903 884141 or via sales@arunmicro.com.